Soul Hunters – the Magic of Manipulation 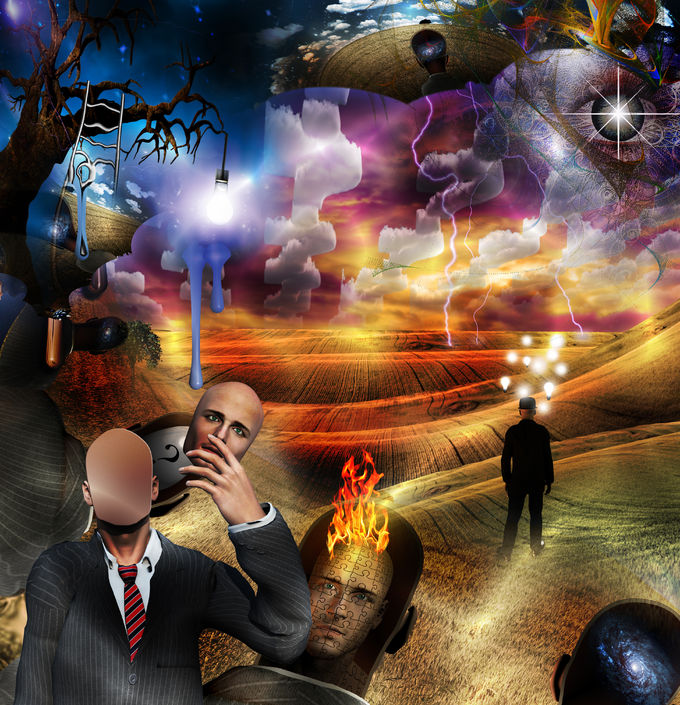 Creating images is fundamentally an act of magic. Our relationship with the world is a relationship of images as they act upon the faculty of phantasy. To control the images is to control reality. Giordano Bruno designed a comprehensive program to both create and manipulate an infinite series of images in order not only to understand and explain reality, but to change it. “Where there is soul, spirit, life, there is everything” (Causa). For Aristotle, to think is to speculate with images; for Bruno the creation and manipulation of images focuses upon the control of reality. The process begins with the imaginative faculty of phantasy, which has repercussions in both the human and divine realms through the bonds which organically interconnect all things from the highest to the lowest, and which come together in a coincidence of opposites.

The faculty of phantasy is that of the imagination, The imagination (phantasia) is the mental faculty which communicates between the body and its corporeal senses, and the Soul with its phantasms. This mental faculty addresses a fundamental precept: the body and Soul speak two very different languages. The language of the Soul comprises of phantasms or images. So, everything the body experiences, from sense data to language, needs to be translated into phantasmic sequences. Since the Soul is understood to have absolute primacy over the body, it corresponds that the phantasm has a corresponding primacy over the word. Although we gain knowledge of the world through sense impressions, these must be transformed into phantasms by the faculty of imagination so that they may connect with, and be processed, by the Soul. The higher processes of thought are made possible by the power of imagination. As Aristotle states: “The Soul never thinks without a mental picture” (De Anima).

Thomas Aquinas continued this line of thought, maintaining that “the Soul cannot know without phantasms” (De Memoria). Imagination and memory are closely linked, and both Aristotle and Aquinas located them in the same part of the Soul. Bruno developed what he called the Art of Memory through the manipulation of a vast array of images, as perception being intrinsically phantasmic, images are easier to remember than concepts, One of the oldest texts on rhetoric(originally attributed to Cicero), the Rhetorica ad Herennium, advises that “nature is not aroused by the common ordinary event, but is moved by a striking new occurrence” Thus, striking images should be employed because their phantasmic character is easier to remember than abstract concepts, or common images. Bruno emphasised the pre-eminence of the imagination and its creative ability above all other faculties. For him, phantasms are no longer passive mental images orsense data without matter, but the vehicles for allowing access to, and participation with, the World Soul.

The knowing creator of images communicates with the divine, and through this communication is enabled to shape the world around him, This shaping is primarily performed by the phantasmic images held within the memory. For Bruno, phantasy is the ‘sense of senses’, being prior to all other mental faculties. For him “all physical changes originate from the powers which are prior to thought and which are its principal and efficient causes” (De Magia). Imagination, as well as being the route directly into the Soul, was also its path outward into the world where its will could be imposed. It is his human ability to create imaginatively, in other words phantastically, which makes humanity divine.

Bruno recognised two kinds of people: those who consciously and actively used the imagination; and those for whom the imagination is settled by external causes – they are passive and unknowing recipients of images. These external sources can be demonic, natural or artificially created. Given that all thought data is phantasmic, for Bruno, man is incapable of differentiating directly between dreamlike data and those transmitted by the senses, between the imaginary and the tangible. Bruno had two important cosmological concepts, forming a dualistic philosophy: the World Soul or the infinite active potency, and matter or the infinite passive potency. He postulated what he called the ‘coincidence of opposites’, where these two potencies are constantly changing into each other. Everything, material and spiritual, is continuously metamorphosing into everything else. The World Soul is able to shape matter from within as it contains all forms, yet so does matter. As the World Soul and matter are present in each other, matter can be formed and affected in infinite ways if the principles of Nature are understood. Mutation is the natural state of Nature, and magic, through the use of phantasy, is the exploitation of that state. The aim is to consciously draw the World Soul into matter, consecrated and prepared for such a process, so that a tangible change can be made in the physical world. There is no spiritual realm separate from what is corporeal, they exist in a state of necessary reciprocity so that what affects one also affects the other.

In Bruno’s philosophy, the phantasmic pneuma is our immediate link to the World Soul: “Every soul and spirit has some degree of continuity with the World Soul, which is recognised to be located not only where the soul lives and perceives, but also to be spread out everywhere in its essence and substance” (De Magia). Through this intimate connection we have access to all archetypes (Plato’s original forms) and the forms they manifest. Bruno believed that images affected the Soul once theyentered it. The recipients, unless they understand the process, are unaware of what happens. Magic works indirectly through sounds and images which pass through the senses. An image differs from asign or character because it holds a greater energetic signature, emphasis and universality. Images are the original language of Nature and the divine. Bruno believed that the closest examples were Egyptian hieroglyphs, and deplored the reliance on Latin and Greek alphabets. Losing the use and understanding of hieroglyphs was the loss of original memory. Therefore images were alive and ensouled, and could act upon Souls, and consequently upon matter. Sight is the most spiritual of all the senses, and is superior because it is images that memory uses in order to recollect accurately.

Yet, we also see by another light than that of the Sun – an inner light, intimately connected to the intellect, or ‘nous’. This light is the World Soul and teaches us as we dream – this instruction being accomplished through images and phantasms. Images from the World Soul are considered phantasy,with hearing and sight being their porters, or the means by which they are communicated. Though we seem to live in the outer world, that is bur a shadow of the World Soul, where for the most part we live.

The Implication of Images

Images affect the Soul once they enter it. The recipients, unless they understand the process, are unaware of what is happening. Magic works indirectly through sounds and images which pass through the senses and impress themselves upon the imagination. Those who have the ability to create the correct images and sounds therefore have the ability to control the mental states of others.This creates a bond between the image and the recipient. In Latin, bond is termed ‘vinculum’ and creates a sustained and malleable connection between the faculty of phantasy of the recipient, and the one who influences it through images. These bonds can be either natural or artificial, and often there are many kinds of bond working at the same time. Some bonds are so strong, such as absolute belief, that they can affect the physical body. A problem is that there are so many types of people, and each one is susceptible to only certain types of bond. Another problem with binding is that bonds change from moment to moment, and so they have to be constantly re-established. Therefore the manipulator of bonds must constantly be making refinements and re-adjustments. The one who binds “must have an understanding of all things, or at least of the nature, inclination, habits, uses and purposes of the thing they are to bind” (De Vinculum). The more skilled you are, the more you can bind. All stimuli are translated to the Soul through phantasy, and the medium is images. True bonding is meant to create a direct conduit to the Soul. Those who bind Bruno termed ‘Hunters of Souls’. The art of binding must always remain unknown to those being bound. Also, it is easier to manipulate several people than one individual, as the faculty of phantasy between a group reinforces itself through the process of consensus or mutual agreement. Thus, systems of belief must be created and constantly reinforced. The bonds themselves do not have to be real to have an effect, an apparent bond is enough, for the power of imagination (being closer to the Soul) is greater than physical reality itself.